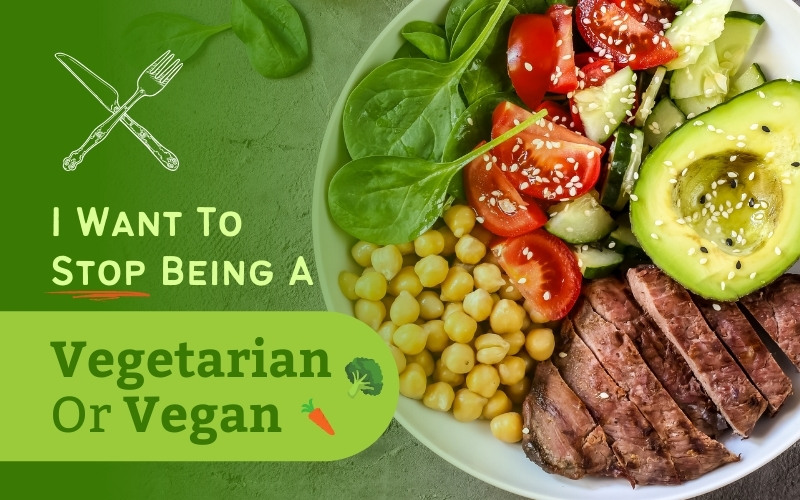 I Want to Stop Being a Vegetarian or Vegan: What Do I Do?

To sum it up, many vegetarians and vegans choose to let go of their non-meat diet for multiple reasons: health, impulse, life events, and mood shifts. Those who choose to leave behind the lifestyle might have developed unhealthy eating habits that are not inherent to veganism nor vegetarianism but can develop from these diets.

Other former plant-based lovers could have acted on a drunken night far enough to just start eating meat again. All of these are relatable realities that many women and men who have ventured into the ethical lifestyle have gone through on their journey to quitting. Read on a more in-depth look into the real reasons people pull out of the green diet.

Why Do People Stop Being Vegetarian or Vegan?

Each person has their reasons but here are a few from testimonials and surveys:

Your Body After You Quit Being Vegetarian or Vegan

Many vegetarians and vegans are scared of what might happen once they decide to foray back into the world of meat and poultry. Perhaps they can fall in from a meatball paired with spaghetti or upon eating a chicken soup while suffering from a fever. Are the horror stories true? Does quitting vegetarianism and veganism make you sick?

The Norwegian University of Life Sciences (UMB)’s Department of Animal and Aquaculture Sciences’ Professor Birger Svihus mentioned his conjecture on the matter. He stated that there would be no reason to suspect the body was unable to digest meat once they started eating meat again. The nutrients in meat also have to be digested when we eat other foods. Enzymes in our bodies break down meat proteins in the same way they break down plant proteins.

While taking on heavy meals, such as a gigantic steak, might leave the stomach uneasy, taking it slow can be a good remedy for this. There is no evidence of a permanent aversion to meat from people who have lived off a plant-based diet for years.

Dr. Will Bulsiewicz, M.D., author of Fiber Fueled, mentioned in an article with Bustle on the same topic, noting that most of the concerns do not lie in the reintroduction of the meat itself, but the consumption of meat in general which can change one’s health. This can otherwise be alleviated by keeping track of one’s meat portions and visiting healthcare professionals to advise you about your diet should you have pre-existing or possible connections to heart problems and other medical conditions.

A different case found people who are naturally unable to consume meat due to meat allergies. Around 1% of the population suffers from allergic reactions upon eating pork or beef. There is no correlation between being a vegetarian or vegan; however, and is already a condition that one has or develops. Clogged-up air pathways, a runny nose, and watery eyes can result from partaking in meat for individuals who live with meat allergies.

Choosing to go back to consuming meat can not only affect your physical health but also your mental health. Some who belong to close-knit vegetarian or vegan groups often join for ethical purposes— believing in the benefits of the diet for animal welfare and environmental effects. The lifestyle can aid in the reduction of methane production and save drinkable water to an extent. These positive effects cannot be denied but when it is at the risk of your health and wellbeing, putting yourself first can be the right decision. It is yours to make and not anyone else decision.

Some friends may shun your decision, but it all depends on your “why” and what serves you and your values at that point in your life. Some vegans and vegetarians try to make it back to the meat-eating population but feel nauseous when smelling pork or chicken legs.

A study conducted revealed a whopping 84% of vegetarians become meat-eaters again. Research shows that the number of vegetarians has increased four-fold over the years, but that retention has been on a steady decline. There needs to be an emphasis on creating varied and nutritious meals in the plant-based diet that many already practice, but it should be noted, that those who do not are the ones who end up eating meat once again.

How to Bring Meat Back Into Your Diet

Diet experts share that the key to going back to eating meat in moderation. Don’t feast on a gigantic pig the first day you decide to go omnivorous. One ounce of meat per meal is the maximum amount that is ideal if you are first starting. A balanced diet should still be the goal whether you are a vegan or not, so choosing healthy ingredients and portions will not be lost in your eating habits.

What Lessons Can You Gain from Quitting Vegetarianism or Veganism?

Many insights that come with quitting being vegetarian or vegan manifest in the form of spiritual reflections. Learning to listen to your body while learning how to eat intuitively can be a refreshing experience that helps you appreciate your body and all it does for you.

Seeing the world in a dichotomy of ethical and unethical is replaced, and you start to see the nuances of the decisions you make that involve looking into the origin of meat products and other foods. There are many ways quitting the plant-based diet can make you grow in mindfulness and peace in yourself, your body, and your place in the world.