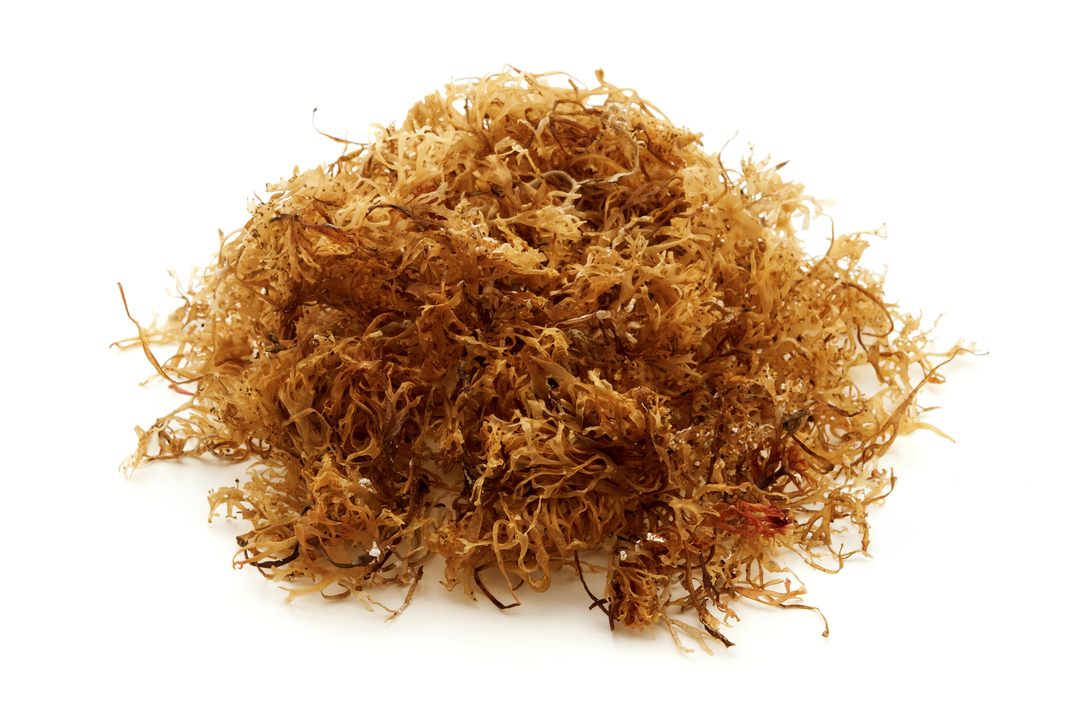 Celebrities and Wellness gurus have discovered Sea Moss, and they are raving about it. Sea moss is the superfood darling of the moment. In certain circles, if your smoothie doesn’t have sea moss, don’t drink it! So what exactly is Sea moss, and more importantly, why is it so popular?

What Is Sea Moss?
Sea moss isn’t a moss at all. It’s a red seaweed. Known scientifically as Chondrus crispus, it also goes by the name of Irish moss. While it the new Superfood on the block, coastal communities have been using it for centuries. Sea moss grows on rocks around the North Atlantic Coast. Although it still grows naturally, the US, China, and Ireland all farm Sea moss. No, this isn’t to meet Hollywood’s high demand for Sea moss! It’s
actually for the carrageenan content.

Carrageenan is an additive that food manufacturers use to bind, thicken, and stabilize foods. For years you may have been consuming Sea moss and been none the wiser! You’ll be surprised to learn that carrageenan is in everyday foods like Almond milk, coconut milk, canned soups, and even frozen pizzas.

Benefits of Sea Moss
Now that we know what Sea Moss is let’s move on to what we’re really interested in, the benefits.

There have been some scientific studies on the benefits of sea moss. Still, most have involved laboratory testing and animals rather than humans. As such, many of the perceived benefits are anecdotal. That doesn’t mean people are making them up. It just means science has yet to prove them!

Improve Skin Health
One of the reasons celebrities have fallen for Sea Moss big-time is because of its skin-enhancing abilities. Sea Moss aficionados claim both consuming and applying sea moss to the skin will dramatically improve your complexion.

In fact, Sea Moss is now a key ingredient in many beauty products. The beauty industry believes it can help balance your skin microbiome, dry out oily skin, and even help reduce severe acne. Sea moss contains calcium, potassium, sulfur, magnesium, vitamin A and vitamin K. Consequently, it might reduce wrinkles, hydrate the skin, and protect the skin from environmental damage. It’s also hoped that the abundance of
vitamins and minerals will help with skin conditions such as psoriasis and eczema.

Digestive Aid
Sea Moss can also help improve the function of your digestive tract and promote healthy bacteria growth. It does this by coating your gut in a lining of probiotics. Healthy bacteria feed off the probiotics and increase in
number. The resulting high levels of beneficial bacteria lead to a healthy gut and prevent an imbalance of harmful bacteria. The lining of probiotics also acts as a lubricant, making it easier for waste to pass through your bowels. You should be able to pass waste easily and regularly without straining.

Furthermore, Sea moss also has anti-inflammatory properties, which can be great for soothing the gut. This is especially relevant if you suffer from IBS, leaky gut, or other bowel disorders. Regular consumption of Sea Moss is associated with a reduction in inflammation and improved gut health.

Immune System Benefits
Your body requires more than vitamins alone to maintain a healthy immune system. Not only does Sea moss contain plenty of vitamins and minerals, but it also has other valuable properties that support your immune system. Sea moss’s different properties make it an antiviral, antibacterial, antimicrobial, anti-inflammatory, and an anticoagulant. You can see why coastal communities have used Sea moss for its medicinal properties for hundreds of years with all those attributes.

Weight Management
Another effect of Sea moss on the body is it can curb your appetite. Along with the benefits for your complexion, this has A-listers hooked. Sea moss can make you feel fuller for longer, so you eat less. Reduced appetite leads to lower calorie intake and, consequently, weight loss. Now, the keyword here is CAN. For Sea moss to be of any help when it comes to weight loss, you need to pay attention to the rest of your diet. Consuming Sea moss will provide vitamins, minerals, and fiber, and it will also take the edge off
your hunger pangs. However, it’s all for nothing if you continue to make poor food choices in the rest of your diet.

Libido
As previously mentioned, one of the things that makes a Superfood is the high concentration of vitamins and minerals. We have already established this is the case with Sea Moss. Now, because of all the vitamin, minerals, and immune-boosting properties of sea moss, it is also a potential sexual tonic. Sea moss is not so much an aphrodisiac but a supplement that boosts sexual health and promotes the sex organs’ optimal function. This encourages healthy libido and performance. If you are experiencing problems with your performance, Sea moss can help when used along with other remedies. The main benefit of Sea Moss is its effect on circulation. Blood flow is critical to getting things started and keeping them going!

Sea Moss in your Diet
So knowing all the potential benefits of Sea moss, you want to add it to your diet. How do you do it? It’s actually much easier than you think. Because Sea moss is almost tasteless, you can add it to a wide variety of foods and experience no taste difference.

You’re probably not going to find Sea moss at your local grocery store, but you should be able to buy it online or at a health food store. Sea moss is available raw or dried, and you can add it to salads and smoothies. Also, it’s available as a powder that you can add to soups, sauces, and baking. For those of us who avoid the kitchen, then a supplement might be the best option. Again, you should be able to buy capsules online or at your local health food store.

Risks
Even though it is a superfood and full of goodness, you should still consume it in moderation. A good diet is a balanced diet. Although there is limited research on the positive and negative side effects of sea moss, we know it contains significant amounts of iodine. Consuming too much iodine can impact your thyroid and lead to hypothyroidism. If you currently suffer from a thyroid disorder and are taking medication, discuss your iodine consumption with your doctor.

Sea moss still needs to undergo thorough testing to determine how beneficial it can be to our health. However, even if it is not a miracle cure for acne or can reduce scarring. It is jam-packed full of vitamins
and minerals that help our bodies on a daily basis. Without a doubt, Sea moss is a superfood worth trying. When you stop by our restaurant make sure to ask about our organic wild sea moss.

5 Fall Recipes – All Vegan and All Good!

5 Fall Recipes – All Vegan and All Good!